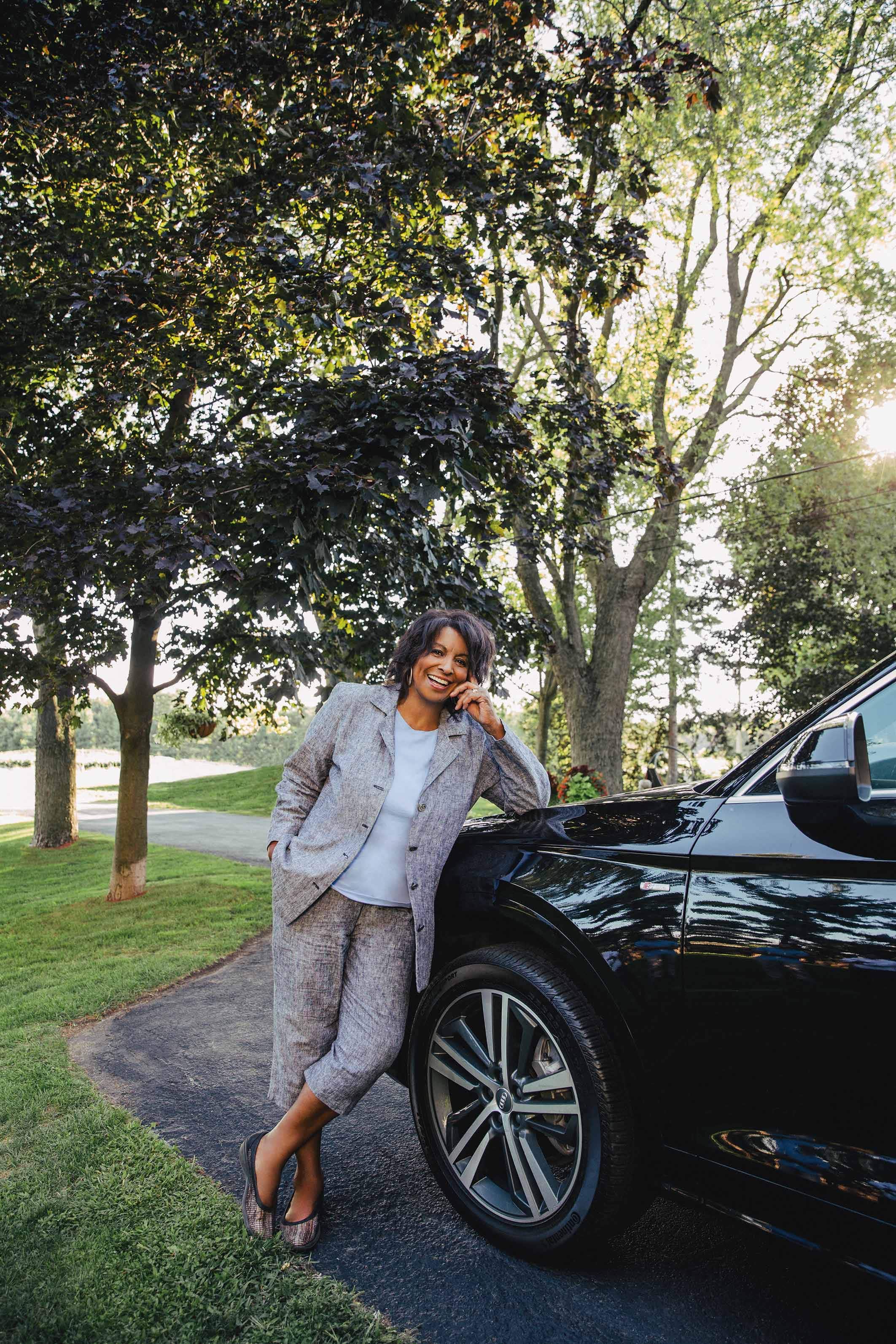 Where do you begin with Nerene Virgin? She’s distinguished herself as a teacher, actor, journalist, historian, politician and rights activist.

For seven seasons, she starred as Jodie on TVO’s Today’s Special, a program that hit number two on Nickelodeon in the US. Then, after nearly a decade with TV Ontario, Virgin joined the CBC’s news team in Ottawa as a community reporter. That lasted until 1989, when CTV-owned outlet CFTO snapped her up for a public affairs show of her own, Eye On Toronto, among other roles.

In 1996, she moved on to the CBC Newsworld team in Calgary, anchoring the national evening hourly newscasts and hosting a show called Coast To Coast. A year later, she launched Saturday Report on the network, before going on to anchor the international news for CBC Newsworld International—a role she held until 2005.

Beyond all her media work and the many other roles she’s played, Virgin remains a dedicated teacher and volunteer—including a dozen years spent cohosting the Children’s Miracle Network Telethon.

She’s also been a dedicated Audi driver for more than 35 years.

Audi Canada was honoured to be able to sit down with such an important member of the family to learn more about her remarkable life.

You’ve accomplished so much and taken on so many challenges. What drives Nerene Virgin? What or who has made you who you are?

I know who I am because I know who I was. I know my family history back to my three-times-great-grandfather, who was kidnapped from the west coast of Africa and brought over to North America and forced to be a slave. And I know that history because a book was written about my ancestry. So, I have a very clear understanding of my history.

My great grandfather was a slave in Maryland and, at the age of 15, he escaped and made his way to Canada. I look back and think: Wow, he made that kind of sacrifice, and took those risks for himself and subsequent generations. I have an obligation to do something with the gift that I have been given.

My mother was also an example to me of courage and resilience and optimism. Unfortunately, when she married, she had no idea that the man she married would end up being just a monster—a master of cruelty in every way you can imagine. And yet, she persevered. She ended up moving out and trying to raise us kids on her own, living in poverty. But, she was always full of joy and optimism and empathy.

My mother and her parents taught me from the time I was little: When you’re born, you come into this world with your dignity, with your pride, with your grace and your honour. And you should leave with those things intact unless you opt to give them away along the way.

And so, I’ve held true to those values all my life. There are more important things than financial gain. The people who have supported me have instilled in me the importance of giving back.

Giving back—that seems to be the thread in so much of what you’ve accomplished. But how do you reconcile it all? How do you describe yourself?

How would I describe myself? I’m a woman. I am a lifelong learner. I’m a wife and mom and grandma. Those are the things I really value.

And, I’m a teacher. I’ve always been a teacher. I’m so very curious. I never stop learning. I love to learn. I love to have conversations with people I don’t even know, even when I’m just standing in line in a grocery store.

You learn about people. Everybody has something to offer. Everybody has a story. You learn the most interesting, fascinating things about who we are, how we think, how we operate and how we interact.

I used to say, when I was working at the CBC, every day was like sitting in class because I was learning so much. And then, when you went on air, it was like you were a teacher for your audience. So, you had the advantage of being both a student and teacher.

Of all the things on your resume, what is it that you’ve accomplished that you’re most proud of?

It was a privilege that I could be Jodie on Today’s Special—a privilege and a blessing. I had no idea at the time how important it would be. I am so blessed to have been able to do work that mattered, and continues to matter to an entire generation today. I get messages from young adults all over the world because the show was number two on Nickelodeon in the United States before airing in Canada, and it was on Nickelodeon for 10 years. It also aired in Saudi Arabia, South Africa, Singapore and Australia.

The biggest sale for me was when it was sold to South Africa, and that was when Mandela was still in jail. Executive producer Clive VanderBurgh came and told us that a network in South Africa had bought it as an example of what the world could be—because you had a Black female co-star with a White co-star singing and dancing and being best of friends. When I learned that, it just moved me to tears.

That was a terrible time in South African history. As Canadians, we tend to think that race issues happen ‘over there’ or ‘back then’. Unfortunately, that’s not the case.
Sidebar with Nerene

You ran into some issues when you ran for office about a decade ago, didn’t you?

In 2007, I ran for politics in Hamilton—and Hamilton is a city that has always had problems with racism.

And I was hit with a wall of discrimination. A reporter wrote an article titled ‘Into the Briar Patch’ and referred to me as a ‘tar baby’. He said that the party had chosen “their favourite tar baby” and that they were only giving me a chance to run because they “didn’t want to run a bland, white male.”

It probably cost me the election. I went and I saw a lawyer and he said: ‘Don’t get involved with lawsuits because you better have deep pockets.’ But, in the end, I did. I sued the newspaper for libel. After five years, they agreed to a very nice settlement with me. I’m really, really proud of that because, a couple of years later, Matthew Green ran in Hamilton and was elected the first Black city councillor—and there were no derogatory references to the colour of his skin in any newspaper.

You really don’t seem like the type to sit back and stew... You tend to tackle issues head-on.

Martin Luther King said that our lives begin to end the day we become silent about things that matter. And, in the end, we will remember not the words of our enemies, but the silence of our friends.

I guess I learned it from my mother and my grandparents—the courage of convictions—that you have an obligation. We have an obligation to stand up for what is right and to speak up against the things that are wrong.

Recently, you’ve been doing media training for high-level execs, as well as workshops on fighting racism—the importance of every person counting and feeling like they belong. So, you’re still very involved in teaching and education. What’s the message you’re trying to get out now?

People sometimes have difficulty understanding that one person can change the world. Martin Luther King Jr. was one person.

So, I ’m sort of working as an educational consultant and emphasizing the fact that ours is not just Black history. It’s Canadian history. It’s not a sidebar. We’re not an ‘other’. We’re part and parcel of the evolution of this country, our broad history and we continue to make contributions. The children of colour in the classrooms can hold their heads up high—not just in February, when it’s Black History Month, but all year long.

I know the curriculum and education system and I understand that the teachers don’t have the time to do this kind of research. That’s what they’ve so often said to us. And, they’re also apprehensive about teaching it. They are afraid they’ll step in it, that they’ll say something wrong.

They’ve asked me things like: How do I refer to you? Are you an African-Canadian? Are you Black? Are you a person of colour? I don’t even know what to call you. Yeah, I think ‘Nerene Virgin’ is a good start.

Are you optimistic that you can be that agent of change?

What do they say—if a child isn’t embraced by the village, they will burn it down to feel the warmth? But I think we’re going to turn the corner because I believe the awareness is there.